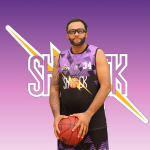 Tyrone is a returning player who was part of the first foundation of Swindon Shock Basketball Club.  He returns to Swindon Shock with a number of WEBBA titles under his belt, including the Seattle Invitational Basketball tournament.  Tyrone was also a part of Shock in their inaugural season of National League.